How to deal with bindweed

While many of the summer weeds that pop up in the garden can be dealt with using a hoe or by hand weeding, bindweed is usually not so easy to deal with. The deep, spreading roots are often out of reach under cultivated plants and left untackled, their climbing stems can drench borders and scale walls by mid to late summer.

I’d always managed to get on top of the white-flowered, hedge bindweed, in my previous gardens. This involved looking out for the first signs of growth and then using a border fork to carefully loosen the soil and trace the underground stems back to their source. Invariably there would be some of the white stems or roots that would break, but a few weeks later I’d look out for re-sprouting at the point where I’d lost the trail and restart my efforts. And to be honest, this is the best way to deal with this stubborn species: constantly teasing it out, every time you see it, and being eagle eyed as it has a great ability to play hide-and-seek.

But when I took over my current garden, I made a huge mistake. In my enthusiasm to make my mark on the plot, I started digging in November, almost as soon as the removal van left. The garden was so overgrown that I had to try to clear and level it so I could plant the following spring. With all the old plants removed, I set about digging through and shifting soil.

At one particular point, close to the end of the garden, I can well remember the odd crunching noise as my spade hit what seemed to be a dense tangle of roots. This wasn’t really to be wondered at as the whole plot was full of old roots, but this seemed a bit different: here were coiled and densely packed roots in a mixture of cream-white and brown. I’d never seen anything like it before and keen to get on, I simply continued chopping through the clump and spreading the soil about to fill in dips and hollows around the garden.

It wasn’t till later in the day that the penny dropped. The cream-white, fleshy roots looked familiar. They were hedge bindweed. I’d never encountered such a huge mass of it before, growing deeper than the depth of a spade. But I had now, and I’d spread bits of the root all around the garden.

Raking through the soil the next day, I did manage to pull out quite a lot of my ‘root divisions’. I had to resign myself to fate and wait to see what happened the following spring. I’ve been paying the price for that mistake for the last 14 years. The bindweed came up everywhere.

Thankfully most gardeners don’t encounter such massive clumps in their gardens. With constant weeding and weaking, it seems that long trails of roots develop. But if you’re taking on a much neglected garden, or the plot of a new house with a field hedge forming your boundary, then beware! You could come unstuck like me. 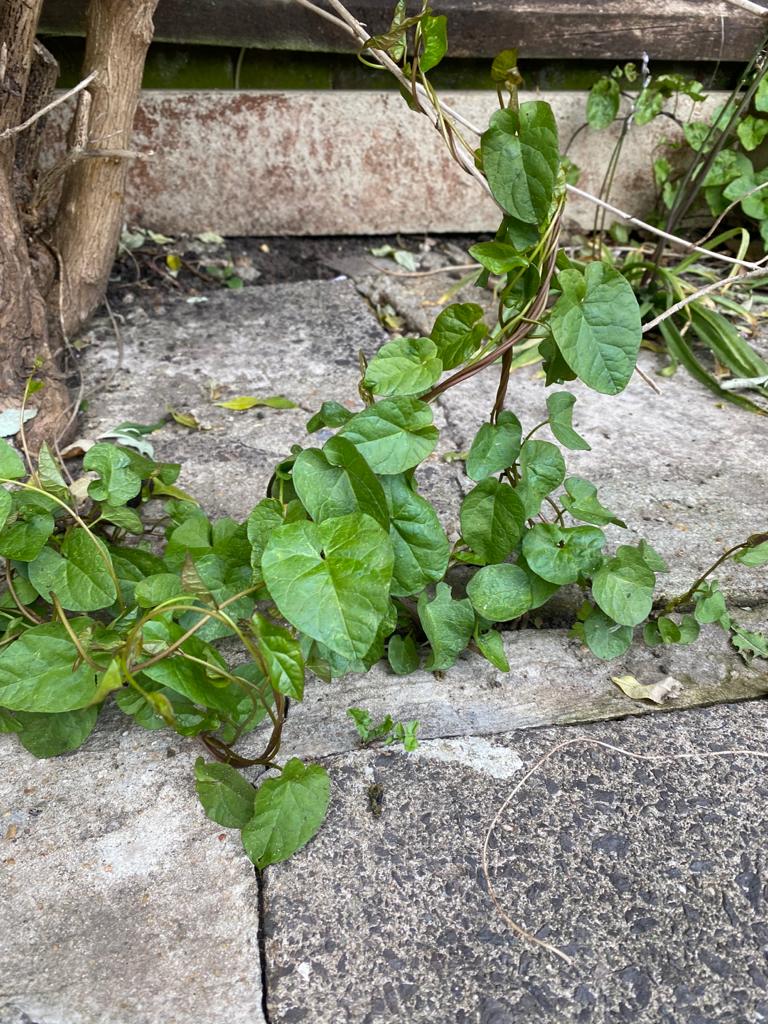 As a result of my mistake, I’ve tried all kinds of ways to get rid of hedge bindweed. In the veg plot, I decided to cover the ground with old hessian backed carpet for a year. This was very successful in that it prevented the bindweed making new shoots above ground where it cold make its own energy in the sunlight. And this technique works for other perennial weeds too.

In the flower borders, I kept vigil right through the following season, pulling out hundreds of new shoots as soon as they appeared. It was pretty relentless, but I certainly seemed to make a difference. But the following year it came back all over the place, and seemingly stronger. There were a couple of weedkillers at the time that I could have used – namely Round Up and SBK brushwood killer – but I don’t like using herbicides.

So my only strategy has been to hand weed – sometimes being thorough and getting as much of the root out as possible, and other times (usually when rushing) that I’ve just pulled off the top growth to try to starve the roots of energy. For the most part my tenacity has paid off, after so many years, and there are areas of the garden where I’ve got rid of the bindweed altogether. But I’m still on it’s case in 2 borders in particular. And I won’t give up, I assure you.