How to grow gladiolus in the garden

See gladiolus growing in their native habitat, and it can be hard to make an immediate connection with the brightly coloured, showy sorts that we grow in the garden. In South Africa, where a huge number of different species originate, they range in scale from the tiny ones that grow in the gravel by the roadside to towering sorts that erupt from grassy fields. But there are also species from other parts of Africa, as well as Europe and Asia. The Gladiolus family are a diverse bunch.

The florists’ ‘glads’ once so beloved of Dame Edna Everage and wielded on occasion by the singer Morissey, have come about by mixing genes from five or six species, most notably Gladiolus dalenii. And it is the latter which has contributed its unusual ‘tetraploid’ genes to the pool. Most plants are ‘diploid’ meaning that they have two sets of chromosomes that are able to split and then combine with those from another plant of the same or different species. The term tetraploid is used to refer to a plant that has double the number of chromosomes, ie four sets.

In the case of G. dalenii this imparts extra size and vigour to the species as well as large flowers – something which other tetraploid plants share. And it is this trait which has been used to breed the large Grandiflorus and Primulinus varieties that are used in floristry.

Which are the best gladiolus for the garden 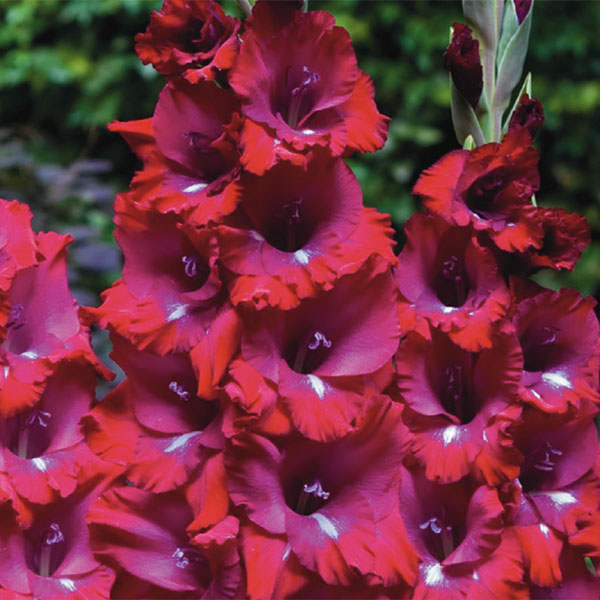 What makes some flowers suitable for flower arranging and floristry, does not necessarily make them suitable for every garden or gardener. The large swords of flower on the Grandiflorus varieties top out at around 120cm tall, so can be top heavy without canes to support them. This makes them tricky to combine with other plants in borders. But don’t let that put you off. They are great for growing in cut flower plots and veg gardens for cutting, and come in a huge variety of colours.

By contrast the smaller spikes of the Primulinus or medium-height varieties, like ‘San Siro’ (shown here) grow to around 80cm in height and are easier to fit into borders in association with other plants. In addition, their smaller size means that they can be grown in large pots or containers.

But for me the best types to grow in borders and containers are the Nanus varieties – like ‘Volcano’, the one in the main photo (at the start of this post). As the name suggests, these have been bred from Gladiolus nanus, bringing in colours from other species as well as the tall and medium height hybrids. Nanus types mostly grow 50-70cm in height and look good planted in small groups.

Do gladiolus come back each year

In mild, sheltered parts of the UK and other frost-free parts of Europe, the highly decorative florists’ gladiolus and the Nanus varieties can be left in the ground or in pots of compost from one season to the next. Where winter temperatures readily fall below freezing, the corms are best lifted once the foliage turns yellow at the end of the growing season. They can then be stored in a dry, dark, frost-free place until the following spring ready for replanting.

Where the blooms have been cut from the plants, the reduced leaf area may not be sufficient to stock up the following year’s corm with energy. This means that flowering quality and size is likely to be reduced. In some cases, the corms may not produce any blooms at all in the next growing season, simply making foliage.

In borders and containers, where the flowers are left on the plants for display, the faded blooms are best removed and the foliage left in place. This allows the plant to make plenty of sugars that can be stored in the corm and for flower buds to form for the following year. Feeding with a high-potash fertiliser when the plants are in full growth also helps this.

When is the best time to plant gladiolus

Available to buy as corms by mail order from specialist nurseries such as Harts Nursery and Pheasant Acre Plants, as well as in more limited ranges from garden centres from spring, gladiolus can be planted in spring and on into early summer. Plantings can be made in batches over a 6-10 week period to stagger the growth and flowering time. This is a good way of extending the gladiolus ‘season’ in the garden. Keep the corms in a cool, dry and dark place until you are ready to plant.

Corms can also be started into growth in trays of compost, in an unheated greenhouse or cold conservatory, during late March. These can be then planted out once fear of frost has passed to produce an early crop of blooms.