With burgeoning flower buds getting ready to burst, late April and early May are show time for tree peonies. First into bloom for me is Paeonia lutea ludlowii with its golden cups made up of rumpled petals surrounding a cluster of pollen-packed stamens – the bees really can’t get enough of it. But this splendid medium-szied shrub has plenty to offer in the form of exotic foliage through the summer, turning a beautiful butter yellow before the leaves fall in the autumn.

And foliage is the particular aspect of tree peonies that I love the most. You see I love creating a tropical look in some parts of my garden and the large, divided leaves on these plants are really valuable. Plus they have the huge bonus of being utterly hardy. When spring comes, they burst into growth and the frost doesn’t seem to bother them. 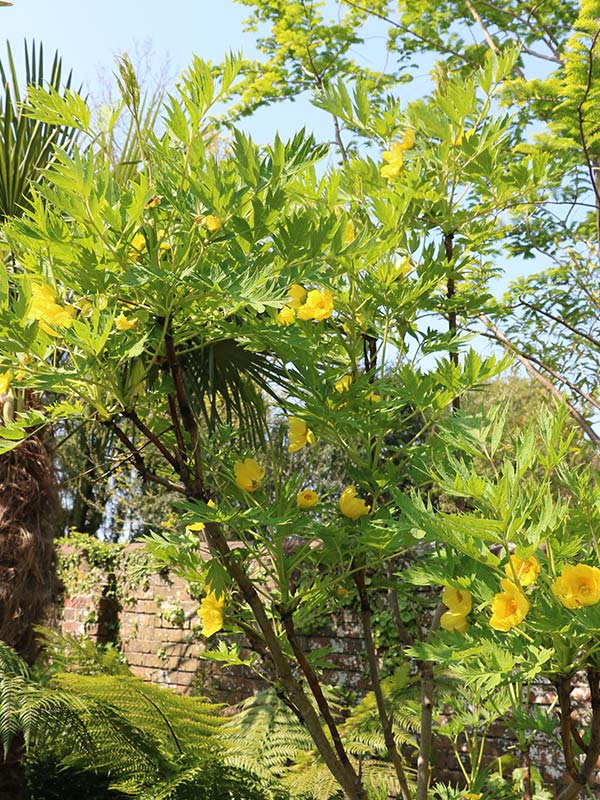 To be honest there are some myths about tree peonies that are really worth dispelling. The first is about their shyness to come into flower for the first time. A young plant of P. lutea ludlowii came into bloom only two years after I planted it in my last garden. And even the thoroughbred Japanese tree peonies settle in quickly if planted during the dormant season. The only time when I think you’d find them reluctant to start blooming is when they struggle to get established. This generally happens because they are planted during the growing season or when they are consigned to dry, unimproved sandy soil.

It pays to improve the soil for anything you plant – but tree peonies in particular will repay the effort you go to. I dig out a hole twice the size of the original pot the plant is supplied in and fork in plenty of my own homemade garden compost – bagged soil improver or compost would do instead.

And the second myth about these plants is that they don’t like to be disturbed and should be left untouched for years. I can cite two instances where this simply hasn’t proved the case. One in my own garden, where I lifted a very large tree specimen and moved it to another part of the plot. Again, I chose the dormant season (early winter) to do it and the plant barely batted an eyelid. In the other instance the plant was moved and split into a number of divisions and flowered in the first year after.

Where to grow tree peonies

These plants are not as fickle as their reputation suggests. I grow them in both sunny and partly shaded positions with equal success. And I’m sure that the strong-growing P. lutea ludlowii would cope with quite heavy shade as long as it didn’t dry out too much at the roots. The fancier, monster-flowered Japanese varieties do seem to benefit from sun for at least half the day if they are to flower well: they also benefit from shelter to stop the petals being minced when they are in full bloom.

They’re not too fussy about soil either, although as I mentioned before they don’t seem terrible keen on sandy, acidic soil. In addition, some can suffer from yellowing foliage on very thin chalk. They absolutely love improved clay – something they share with their herbaceous cousins.

What are the best tree peonies to grow 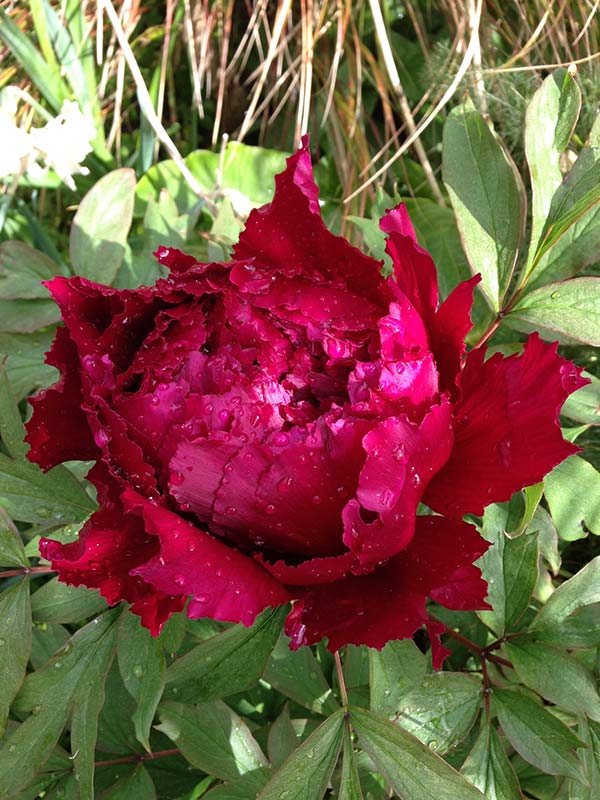 Some of my absolute favourite tree peonies are necessarily the most flounced and frou-frou varieties. Personally I wouldn’t want to be without Paeonia lutea ludlowii, as you might have already guessed! It can be left to get large, which may not suit every plot. But by pruning out the oldest, tallest stems after flowering, it is possible to keep it within bounds. Another species, smaller in stature and with more finely divided foliage is P. delavayii. Individual plants vary in their flower colour from red-brown to shades of yellow, but all are lovely.

But it is the Japanese tree peonies – generally hybrids of P. suffruticosa – that pack the biggest punch when it comes to flowers. Their massed petals, each crumpled where they were folded in the bud, create huge blooms that are nothing but spectacular. I currently have only two – the plum-red ‘Kuro-Ageha’ (shown here) and the purple-pink ‘Shimadaijin’ (still in bud). The second is later flowered.

Such beauty comes at a price however, with the Japanese tree peonies coming in at £50-100 depending on the size of the plant. It is the grafting expertise that goes into these spectacular plants, together with relatively slow growth to reach saleable size, which commands a premium price. By comparison, the species are considerably cheaper since they can be raised from seed.

So find a spot in your garden for at least one of these beautiful plants and celebrate spring in style.