Whatever size of garden you have, there should always be space for at least one tree and this exotic looking, hardy albizia is one of the best, even for small gardens. It’s a great favourite of mine with delicately divided, mimosa-like foliage and flowers that look like shaving brushes. And it’s looking at its best in late summer, covered in bloom.

Also know by the common name of Persian silk tree, Albizia julibrissin is a tough, drought-resistant tree which is grown widely in continental Europe as well as in the US and Australia. In the UK it does really well in the south and east of the country where it gets well ripened by the heat of the sun. Given this, it should flower well at the tips of the current season’s shoots by August. In the north and west, it should be hardy in all but the coldest and wettest spots, but it is less likely to flower well in response to less heat and sun. 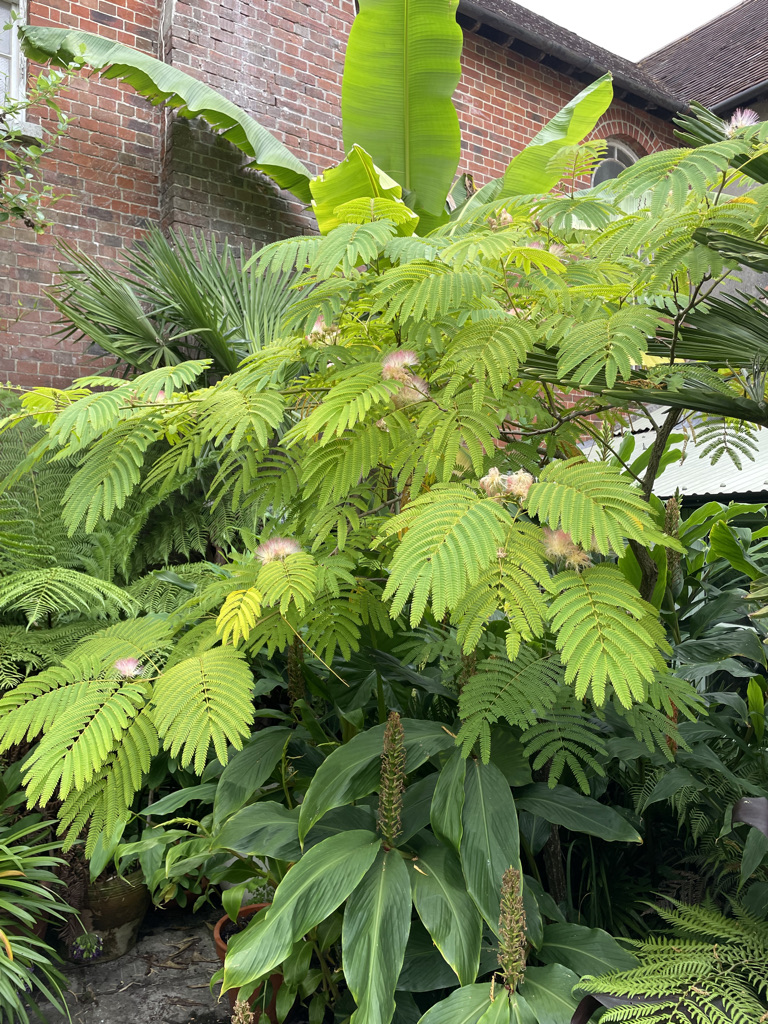 How to grow Albizia julibrissin

For me, it is worth just growing this tree for its foliage, however. The leaves are delicately divided and look very much like those of the mimosa. Left to its own devices it will form a corky, ridged trunk supporting a spreading, domed crown. And with such fine foliage, it casts a little, very welcome, shade underneath.

It starts late into leaf, usually in the second half of May or even June, and starts to drop its foliage in September. And that means that it provides shade at the height of summer, just when it is most needed. And if you want to keep it in trim in the tiniest space, then it can be grown on a standard stem with the side branches cut back hard, just before it comes into growth.

There are a couple of dark-leaved forms – one called ‘Summer Chocolate’ – which look good against a pale background, or looking up through the foliage to the sky. But to be honest, I prefer the green-leaved species best, as well as a variety called ‘Ombrella’ which is more compact and has entirely pink flowers.

Where to plant Persian silk tree

I grow my Albizia julibrissin in a sunny spot where it can benefit from the ripening effects of the sun as much as possible. And I’m certain that’s what makes it flower for me every summer. In a shadier spot, there is less likelihood of the characteristic shaving brush blooms, but it will still make an attractive tree. It won’t thrive, however, in deep shade from large, low-hanging trees or created by high walls.

It grows well in all but the wettest, heaviest clay soils. And don’t buy a large specimen to start with – it does best if grown from small plants, about 12-18in (30-45cm) tall, and will grow rapidly into a small tree in just a couple of seasons. This will also allow its roots to get well established and create a firm upright specimen. Large, pot-grown specimens don’t always make a stable root run and can be blown over.