What makes a plant a weed

Spring warmth and moisture invariably encourage a rash of seedlings and shoots to appear in borders but it can be difficult to identify what you consider to be a weed – and what is not. So why have I put up an image of a pretty blue plant? That doesn’t look like a weed, I hear you cry! Well in my garden I have a lot more of it than I would like and, according to definition, that would make it a ‘weed’ for me. 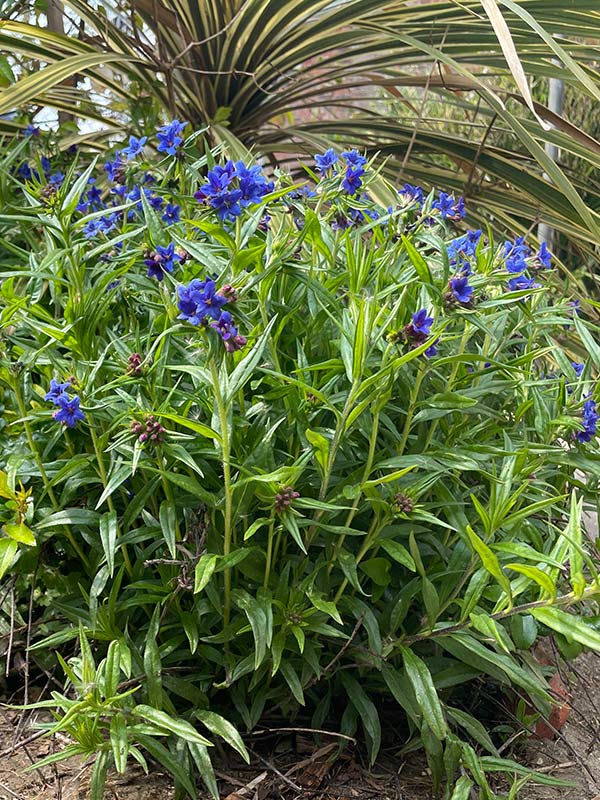 It was given to me by my sister when she moved into her new house. It was growing in a rocky bank and had spread quite widely in what were inhospitable conditions. I didn’t know the plant, but liked the look of it and enthusiastically brought some home for my plot, where it didn’t even blink in its establishment. Now it has crept about widely, rooting where the stems touch the ground and scrambling through other plants. And my great friend Matt Biggs has finally identified it for me as Buglossoides purpurocaerulea. The common name of creeping gromwell certainly seems to describe its habits.

And this means that it has rather outgrown its welcome. Not that I don’t appreciate the free flowering and lovely colour in spring: I just don’t want it taking over. So I’m currently digging out many of the clumps and finding the stringy stems and roots in all sorts of nooks and crannies. This plant is definitely a survivor – probably one of the most defining attributes of plants that are considered to be garden weeds.

What is a weed?

The often quoted definition of a weed is ‘a plant growing where it is not wanted’ and sadly that is a label we put on many plants that pop up in our plots. Groundsel, hairy bitter cress, nettles, bindweed, to name but a few. They’re all plants that lots of gardeners would consider as weeds, and yet ‘in the right place’ they are beneficial to wildlife and form part of the natural cycle of life to which we are all linked.

And then there are the ‘garden escapes’ too, plants that have been treasured as ornamentals for gardens, only to have spread by seed or trailing roots into our countryside. Many of these have then been rejected in cultivation, only to become ‘weeds’ in the wild – Rhododendron ponticum, Himalayan balsam, giant hogweed and Japanese knotweed are all cases in point.

Even some plants that we take for granted both in gardens and in the countryside – Alexanders, ground elder and sycamore for examples – are thought to have been introduced to Great Britain by the Romans. Their original usefulness (as food plants in the case of the first two, and as a shade tree in the second) has now, for the most part, become overlooked. And in some instances they are now considered as weeds.

But we should never dismiss the usefulness of any plant – whether it is to the overall environment or more directly to ourselves. A resurgence in interest for food foraging has meant that Alexanders, ground elder and many of our own native species (including nettles and sorrel – both considered weeds by many) have become popular on the plate. As for the sycamore, its prolific seeding makes it a great pioneer tree species for land stabilisation and as a potential nursery species for other trees. And with increasing summer temperature in the UK, its shading capabilities can be put to good use.

Changing values and tastes also mean that some of our native wildflowers – once considered weeds in certain circumstances – are now being planted and sown in our home plots and pots. Cornflowers, field poppies and corn cockle are all now popular for benefitting wildlife, and are appreciated for their natural beauty. The fine line between the plants we refer to as wildflowers and those we call weeds is constantly on the move.

And nowhere, perhaps, more so than in lawns – the mainstay of many a cherished garden the length and breadth of the country. Down at grass roots level many more gardeners are now leaving clover, yarrow, daisies and even dandelions for bees, butterflies and other insects.

When to tackle weeds

So when it comes to all those seedlings and shoots popping up in your borders, it all comes down to keeping what you’re happy to welcome in your plot and ‘weeding out’ what you don’t want. Certainly all the prodigious seeders and tough, resilient perennials that are considered common garden weeds will need keeping in check if you don’t want them to take over. I’ve been gardening for over 50 years now and it still puts me to the test. 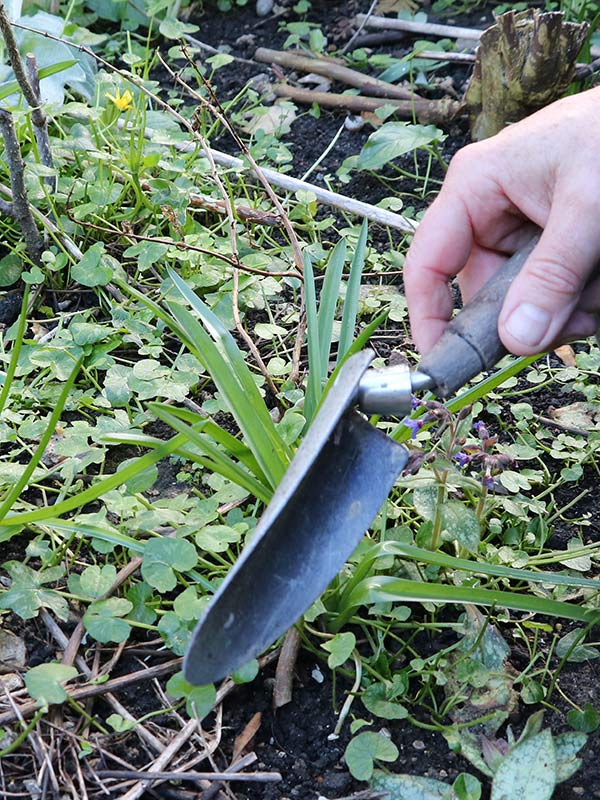 If conditions are dry, then regularly hoeing between your plants will slice off unwanted plants just below ground level so their tops will shrivel away. The annual weeds won’t regrow from the roots, given this treatment, though the deep-rooted perennials undoubtedly will. But keep the hoe moving through the soil surface ever couple of weeks and they will finally succumb. It has the added benefit of creating a dry, dust-like ‘mulch’ on the surface if the soil which is inhospitable to germination of further weed seeds and which helps to limit soil moisture loss in summer.

Handweeding can be a lot more back breaking, but it does allow you to be thorough. Try to get the unwanted seedlings out while they are still young to avoid too much soil disturbance which will bring more seeds to the surface for germination. Use a trowel to dig out perennial species, aiming to trace the roots back to their origin.

And if you can tackle your known weeds in spring, then it will help to limit their reappearance for the rest of the growing season. Perhaps it’s a timely job for the weekend?