What’s eating the buds on my fuchsias

A gardening friend in Poole, Dorset, sent me a text and photo in May 2020 asking what was making the growing tips of his fuchsia become distorted and eventually turn brown. At the time he had a collection of hardy types in his garden as well as quite a lot of tender varieties which had just been planted outdoors for the summer. While I immediately recognised the problem, I felt awful being the one to break the news to him. 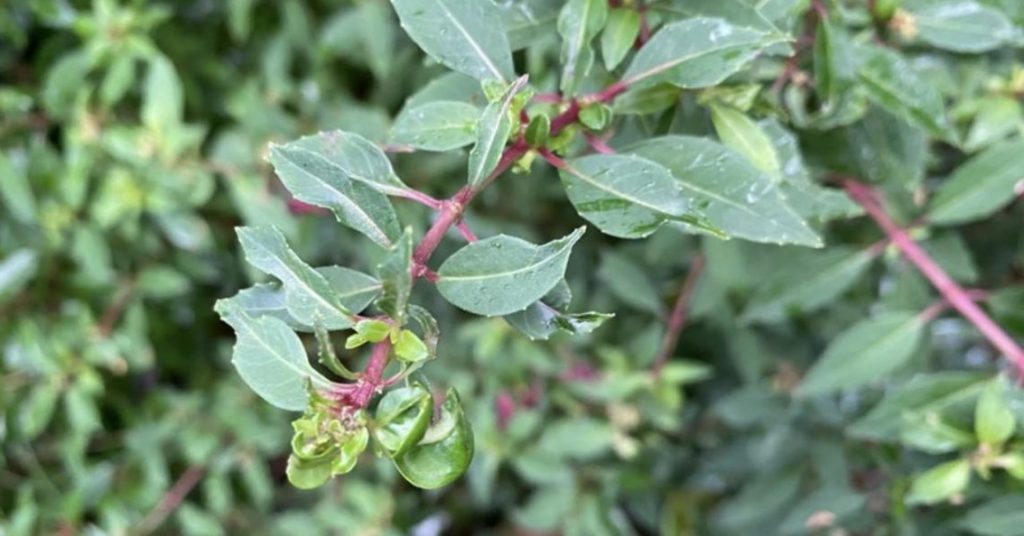 The microscopic mites suck sap on the new shoot growth and inject chemicals into the tissues which the plants react to by becoming puckered, twisted and often flushed with yellow or pink tinges. With heavy infestations all the shoot tips may be affected with the result that the fuchsia is no longer able to produce any flowers. The plants are not killed by the mites, but growth is so severely compromised that they lose their decorative value.

How to deal with fuchsia gall mite

I discussed with my friend the options open to him to try and deal with the infestation as there is no chemical control shown to be effective.  The first thing was to cut back and burn the stems showing the infestation. Next I suggested pinching out the growing soft growing tips of all the remaining plants in an attempt to remove any of the pest that might have already moved in. The mites are so tiny that it is pretty much impossible to see them with the naked eye.

And the last thing at this stage was to suggest feeding the plants with a high potash liquid tomato feed to toughen the growth to try and make it less palatable to the mites. All this was done with limited success. The mite rampaged through some, but not all the fuchsias to the extent that by July, my friend was digging out and ditching many of his infected plants so as to reduce the number that needed observation and treatment. And by late August, it seemed that the infestation was moderated if not entirely eradicated.

At the end of the growing season the plants were all cut back hard and rather than putting the tender varieties in the greenhouse where the mites would happily thrive, they were buried in deep holes in a sheltered corner of the garden to overwinter them. This technique was passed on to me by my uncle when I was a child, simply as a means of overwintering fuchsias without a glasshouse.

I thought it would be worth trying it to see if the mites could be ousted. We’ll see how they do in 2021. Meantime, all the hardy fuchsias were all cut down to ground level in the autumn and any leaves collected to be disposed of. Hopefully with the mite reduced to small numbers, the predatory mite Amblyseius andersonii which is sold as a biological control might be used to keep the fuchsia gall mite under control in the coming season.

How far has fuchsia gall mite spread in the UK

The incredible thing about fuchsia gall mite is that it was only first identified in Brazil in the 1970s. It then appear in mainland Britain in 2007. I had my first enquiry about it from a magazine reader near Chichester in 2010. Now in the last few mild winters, fuchsia gall mite has been able to thrive along the south, south-west and west coasts of England and Wales. In has also moved inland in the south, in particular cropping up widely in London where the mild winter conditions in the city keep temperatures up.

But the intensely cold conditions of February 2021 may have done gardeners a favour in knocking back the fuchsia gall mite populations outdoors as it is thought not to be able to survive prolonged periods below 5C. This may be something of a saving grace for hardy varieties outside. Of course mites surviving on tender varieties overwintered indoors may re-infest the outdoor types in the early summer.

It’s worth remembering that you may unknowingly introduce the mite into your garden or greenhouse by obtaining cuttings from friends in areas of heavy infestation. It pays to be cautious.