Why do my roses get black spots on the leaves

The black spots that appear on the leaves of roses in the growing season are all down to a fungus which gives rise to the aptly-named rose blackspot. It is just one of the 3 fungal scourges of roses, the others being rose rust and powdery mildew. And if your roses get all of these in summer they can end up looking in a pretty poor state. You may also find that the plants become weak as a result of so much of the leaf area being compromised and the essential sugars being taken from the foliage.

Blackspot is probably the one that is most visually noticeable though, and it is worth going through your roses in the dormant season to check for it. With fewer leaves on the plants, you may well notice the distinctive black spots on the main stems of some susceptible species and varieties. In my garden, I find these mostly on the shrub roses, such as forms of Rosa alba in particular. And such patches are likely to harbour spores that can re-infect new stems and leaves in the spring and summer.

How to reduce blackspot infection 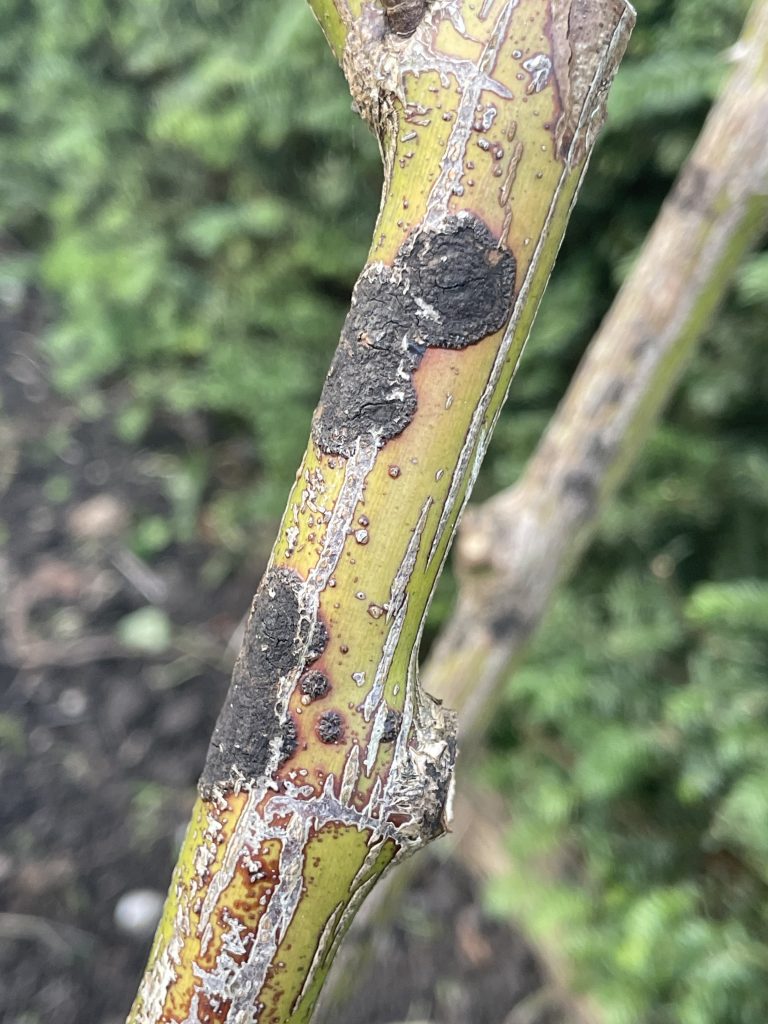 Spores also overwinter on fallen leaves and these need to be collected up so they don’t spread the disease back to the plant. It’s also a good idea to mulch around the base of roses with well-rotted compost in late winter to smother any spores in the soil and to stop rain from splashing them up onto stems and developing buds. Do take care to keep the mulch from touching the stems though.

Pruning out heavily infected branches in late winter, before growth starts can also help by removing the source of infection. And if you prune to outward facing buds, you’ll keep the centre of your rose bushes open to allow beneficial air circulation. This will all the foliage to dry off between rain showers and thus reduce the humid conditions which the spores of blackspot, rose rust and mildew all need to thrive.

Blackspot is one of the diseases that rose breeders are constantly trying to develop resistance for in their new varieties. Modern bush (large-flowered and cluster-flowered), climbing and modern shrubs types generally have good resistance. Make sure that disease-resistance is one of the factors that you take into account when choosing what to grow. All nurseries will give an indication of this on their websites, or else give advice if you ask them. Remember that the older varieties may not have the same ability to shrub of blackspot or other diseases, as they were often simply selected for particular flower colour.

Many types of species rose are also susceptible to rose blackspot. You only have to take a walk in the countryside or by waste ground in the city to find dog roses or briars. And these are often covered in fungal diseases, particularly if they are in a hedgerow. In the open, they generally show fewer symptoms due to the better air circulation around their leaves. But any diseased dog roses do provide a source for the blackspot, rust and mildew to spread onto roses in gardens. This occurs because the spores which the fungi release are microscopic and thus light enough to be carried through the air in their billions. Unknown they then land on the foliage to infect the plant.

So my own Rosa alba plants will have the worst infected stems (like the one shown in the image here) pruned out. And I’ll mulch around the base of the plants. That way I’ll have fewer disease problems in the summer. It’s what good gardeners do!